Work with graphic design? Check out our macOS design apps Vectoraster 8 and Patternodes 3 for custom halftones, patterns and animations.

Shiny, glowing, metallic or plain, this app's got all the dice you didn't know you needed until you saw them. Set up your dice collection, choosing dice types, materials and backgrounds to fit your taste or the game you're playing. Then roll the dice in full 3d, move them around or tap to select and re-roll or remove individual dice.

All rendered with advanced shaders and high quality materials, along with a modern clean UI to keep focus on rolling and hoping for the best.

This app replaces our old Nice Dice app. The dice are still nice, it's just that now the app is more like a dice bag, so we call it Dice Bag. Perfect for table-top game players missing some specific dice or school use for math and probability experiments. Maybe you're just tired of dice ending up on the floor?

Links to reviews or features of Dice Bag on other sites.

From today on, and effective for at least a couple of months, both our password app DotPass (iOS and macOS) and the dice roller app Dice Bag (iOS) will be available for free on the app store.

The reason for this is simply that they've both been around for a while now, ad we're hoping this will let new users find them and try them out. Depending on how the interest for the apps develops during the period they may then become paid apps again, or they might remain free. There are no plans in either case to make them freemium in any sense with additional in-app purchases or add ads or information collecting in them to generate revenue.

So, if you're looking for a new way to deal with your passwords (you know you should) or you sometimes want to roll dice, this is good news!

The Dice Bag 3d dice rolling app has been updated again, this time to v 1.0.8, adding support of landscape/portrait auto rotation on iPad along with some other changes to fit the interface better on different devices.

The Dice Bag 3d dice rolling app has been updated to v 1.0.7, adding some nice refractive glass materials that a lot of users have been requesting along with a couple of new and improved glowing ones and two new tile pattern backgrounds.

The Dice Bag 3d dice rolling app has been updated to v 1.0.6 today with some more changes and improvements:

The Dice Bag 3d dice rolling app has been updated to v 1.0.5 today with a couple of changes and improvements:

The Dice Bag 3d dice rolling app has been updated to v 1.0.3 today. The new version fixes a bug that could mess up things if you started rolling new dice while the sequence of a previous roll wasn't finished yet, and it also tweaks the physics and performance a little to make the rolling feel snappier and hopefully more realistic.

After the initial release the iOS dice rolling app Dice Bag has now been been updated twice, to 1.0.1 and 1.0.2 with a bunch of little tweaks and improvements based on your feedback:

With these updates the new Dice Bag app is no longer free, for now it'll be $0.99 and the old Nice Dice app will now be removed from the App Store.

Dice Bag on the AppStore


The new iOS dice rolling app Dice Bag has now been released on the AppStore. Dice Bag is a utility app that basically works like your own set of customizable digital dice. It's not a game in itself, but supports basic functionality like removing or re-rolling individual dice so you can use it to play many dice games if you like. The app simply to provides dice you can use in whatever game you want to play, with the focus being on making these look as good as possible and letting you style them to suit your game or personal taste. 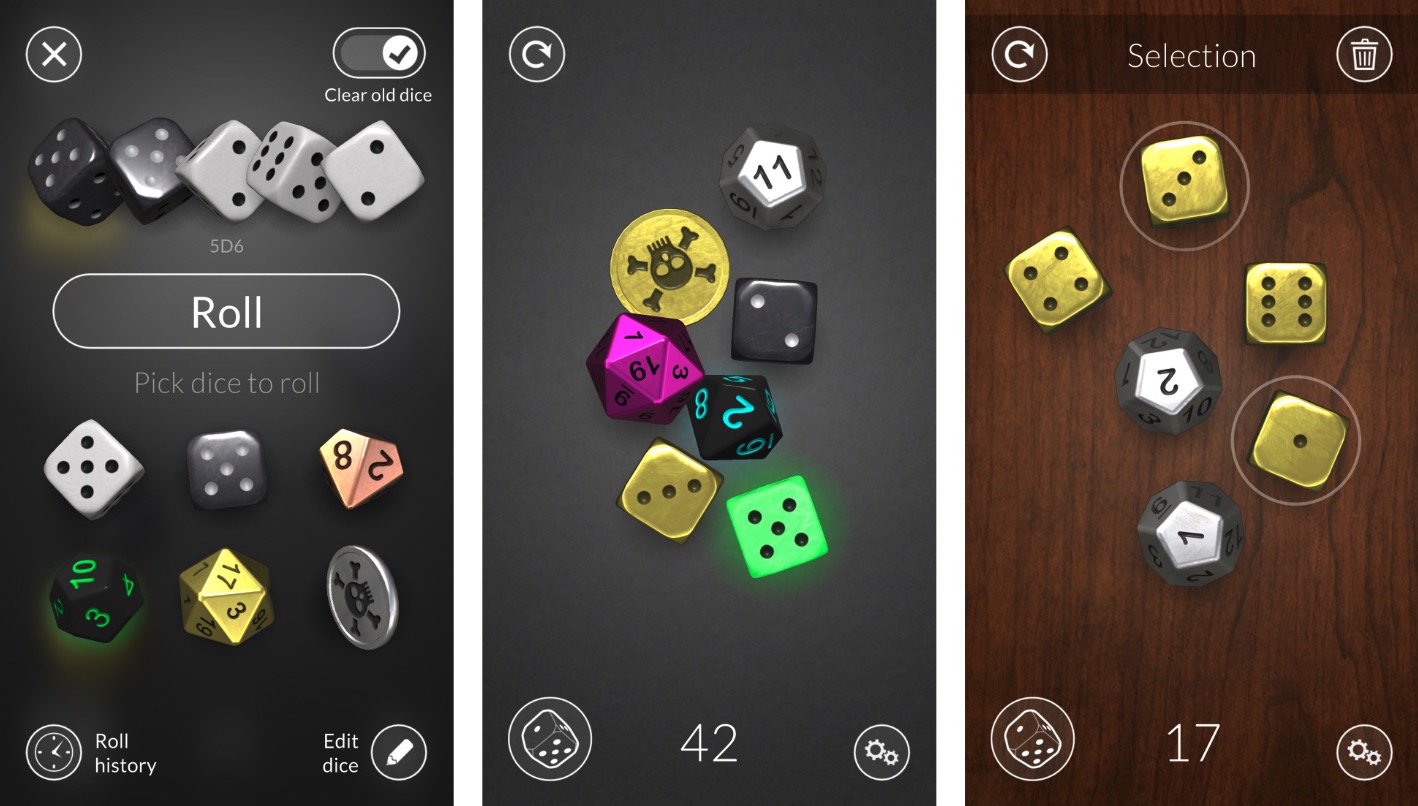 This app replaces our old app Nice Dice and offers the same general functionality but with a more flexible system of rolling dice and combining different materials. To ease the transition for existing users the new app will be free for a period of time and there will be a notification in the old Nice Dice app. After that Nice Dice will no longer be sold on the AppStore and Dice Bag will not be free any more.

Dice Bag on the AppStore

Purchase process
This product can only be purchased via the Appstore links, all payment processing and app delivery is handled by the appstore.